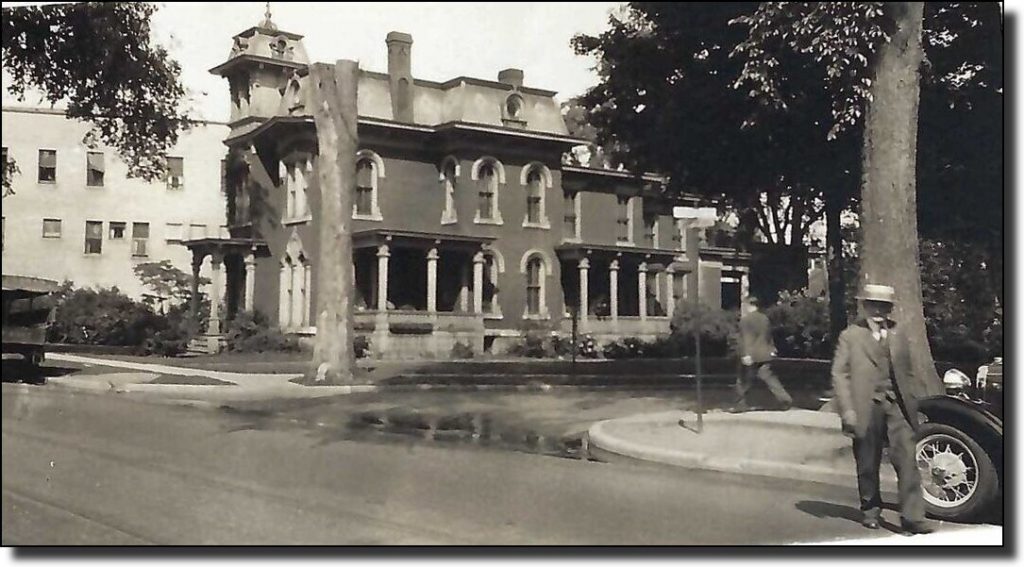 Charles Street is a small, one-way street that runs parallel to North Main Street. It’s a residential street, and most of the time, you wouldn’t even use it unless you are visiting someone who lives there or there is a detour for street repairs on Clinton Avenue. However, Charles Street has some gorgeous old houses, though some need a little TLC. There are stories just waiting to be told about those houses and the people who built them! We’ll leave that for another day.
Today we focus on Charles Wesley Collins, the man whom Charles Street was named after. Collins was born in Canastota in 1841 to Halsey and Lucy Woodruff Collins. The family moved to Cortland in 1855, and Charles became an indispensable part of the community. He was active in the newly formed YMCA, the Excelsior Hook and Ladder Company, the Cortland Protective Police, and the National Bank of Cortland. When the city of Cortland voted to put in a sewer system, Collins was appointed as a commissioner on the Board of Public Works.
Charles Collins was a smart businessman, too. He began as a clerk in a dry goods store, and that was where he met Calvin P. Walrad, who became a lifelong friend. You might remember Walrad would eventually become the president of the Cortland Savings Bank. He was also a part of our Grace Street write-up. In 1862, Collins formed a partnership with Leavitt D. Garrison who had an established grocery business. They added a line of crockery and lamps and they were quite successful. After about three years, they parted ways, and Collins opened his own store which featured crockery, lamps, and other household furnishings. Garrison and Collins remained fast friends. You might have noticed that Collins’ mother’s maiden name was Woodruff. It just so happened that her brother was Madison Woodruff, whom we previously discussed in our Woodruff Street story. Woodruff had a crockery business, so it makes perfect sense that his nephew Charles Collins would have sold crocks! In fact, according to his obituary, Collins’ business was the only one like it in the city of Cortland, and when he sold it to a man in Syracuse in 1900, he retired. The inventory Collins sold was worth a great deal of money and he had no need to work after he sold the business.
Collins was a little unlucky in love in that he married three times and was twice widowed. His first wife Mary Mudge and he had three children. She died unexpectedly at only 47 years old. Her parents were early Cortland settlers, and she was both well-educated and well-read. She was active in the community as president of the Cortland Library Association and she was a member of the WCTU (Women’s Christian Temperance Union). In fact, Charles was a Prohibitionist, so they were teetotalers. Collins’ next wife was Rowena Thompson whom he married in October of 1892. She died the following June. He next married Arabelle Barnes in 1897, and she survived him after his death in 1915.
Charles owned a home at 18 Clinton Avenue, the site of the present-day Kinney Drug Store and parking lot. Behind his home, he built a house for his son Halsey for his marriage in 1903. This was 4 Charles Street. Part of the street was opened in 1890 and the rest of it was opened in 1913. Unfortunately, both homes were torn down. 18 Clinton Avenue was demolished sometime in the 1940s and 4 Charles Street seems to have been torn down in the early 2000s. Some might remember a beauty salon named Rosa’s at 4 Charles, though I remember a short-lived (and fabulous!) consignment shop called the Merry-Go-Round in the early 1990s. City directories show that Rosa’s Beauty Salon was at 4 Charles from about 1957-1984, though her business was on Clinton Avenue prior to that.
It’s fascinating that the Charles Street story touched on not only elements from our Grace Street and Woodruff Street stories but also the one we did about Floral Fountain Trout Park! (The introduction of the sewer system in Cortland was part of the downfall of the park.) If you missed these stories, you could use the search feature on our Facebook page to find them. Go back and check them out! ~Tabitha
2021-03-19
Previous Post: Streets of Cortland – Comando Avenue
Next Post: Streets of Cortland – Rickard Street