Early settlers in Town of Harford

By: Lynne Lash
In: People
Tagged: early settlers
It’s been over two months since I was at the Cortland County Historical Society researching early settlers of Cortland County. I had started looking at documents and pictures for the early history of the Town of Harford and was very excited going through picture files for the town. You never know what you will find! I’m eager to share some of the pictures and stories with you.
Bertha Blodgett called Harford the “place of hills”, Owego Hills to the north, and Richford Hills to the south. It was the last of the towns of Cortland County to be settled. Harford was organized from Virgil as a town on May 2, 1845. It contained many small hamlets- Harford, Harford Mills, Chicken Point, Babcock Hollow, Daisy Hollow, Glacier Hollow, and Griggs Gulf.
The first permanent settler was Dorastus DeWolf who settled on lot 12 in the Boston Ten-Towns in 1803. (see the image from 1876 Atlas) Jacob Hemingway, also from New Haven, CT, settled soon after on lots 13 and 16 in the Boston Ten Towns.
Among early settlers to the town were Stephen and Phebe Carpenter. They built their home on Carpenter Hill, Lot 51. Their three sons, John, Francis, and Stephen Henry also settled on the hill. (see the image from Cortland County Atlas 1876) 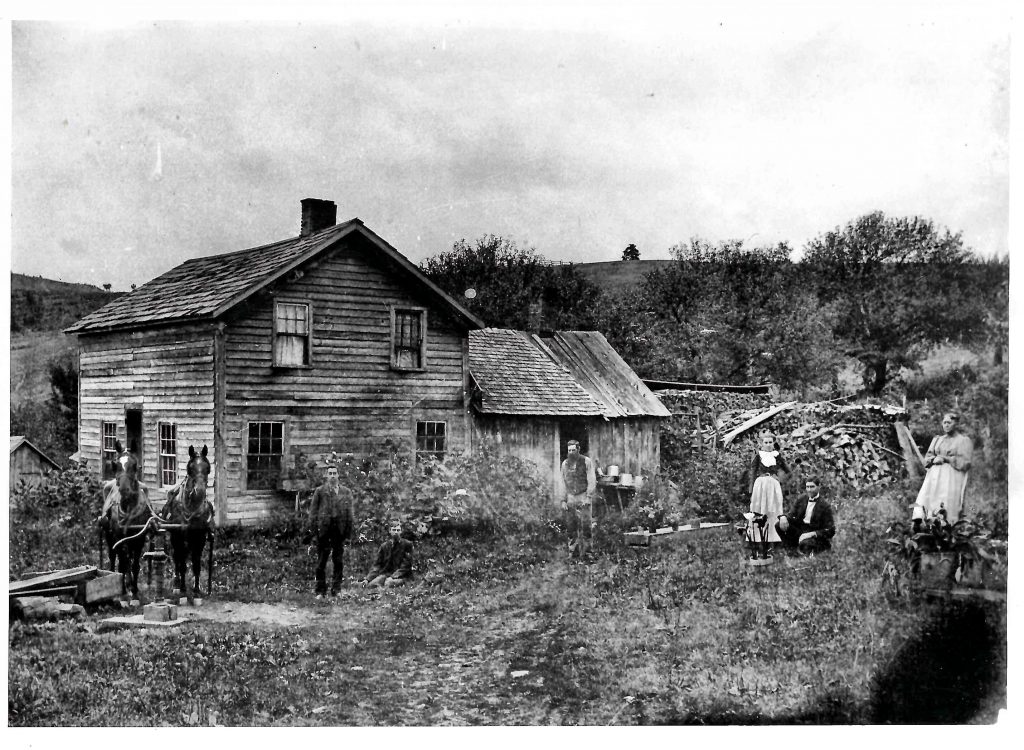 I found this wonderful picture of Stephen Henry Carpenter and his family in front of their home on Carpenter Hill. What was so unusual was that there was so much information on the back! It was taken about 1896 by Wesley Kimmich of Groton. From left to right – Archie Ray and Artie Lynn (twin sons), Stephen Henry (father), Lucy G. (daughter), Jay S. (son), and Etta Amanda (mother). Stephen Henry died in 1921 and Amanda in 1940.
2021-05-15
Previous Post: Noah and Charlotte Carpenter – early settlers in Homer
Next Post: Moses Hopkins and Johnathan Hubbard – first settlers in Town of Cortland