You’ve never heard of Fitz Avenue? It is now called West Main Street, and the name seems to have changed somewhere between 1908 and 1910. The original name might have been Meyers Street, at least there is a reference that says so. The 1896 city directory has Fitz Avenue, and the 1888 map of Cortland has Fitz Avenue, but I’m not sure what year it came to be called Fitz Avenue. So, what is the history of this street?

Fitz Avenue was named after Fitz Boynton. We mentioned Mr. Boynton last week in our look at Copeland Avenue. At the time I wrote up the story on Copeland, I had not yet discovered that Fitz Boynton had built a grand home with William Copeland because Fitz had married William’s only child, Annie Copeland! That’s a really great reason to build a home together! 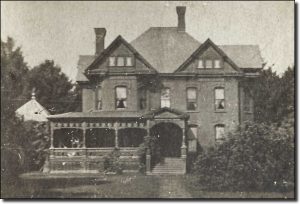 Fitz and Annie were married at the Presbyterian Church in 1872. A grand reception at her father’s hotel, the Messenger House, followed. They would have three children, Hattie Emerson (named after Annie’s mother), Edward C., and Fitz William. Sadly, Hattie died at just five months, leaving the couple to mourn their only child at that time. It would be two years before they welcomed another child into their family.
Fitz Boynton was as elusive to track as his father-in-law, William S. Copeland, was for last week’s street post. Although he was the president for several years of the Second National Bank, and he operated a drug store with his father-in-law, I was unable to locate much about this gentleman who had a street named after him. He disappeared from city directories after his wife Annie died in 1897 so I turned to Ancestry to try to locate him. I thought that perhaps he moved out of Cortland. I found a Fitz Boynton in California who might fit the bill. The age is close, he was from New York, and he was a miner in California.
We have this one photo in our collection which is labeled “Mr. Boynton.” Could it be our Fitz Boynton? The voter registration record from California lists that Fitz Boynton as being 5’ 10” with dark hair, fair complexion, and blue eyes. It has his occupation as bookkeeper and date of registration as of August 7, 1896. Did he go west to pursue something different with the intent to have his family join him, only to have his wife die in 1897? His sons were teenagers at the time and had their maternal grandparents here to rely on, so maybe they never joined him out west. Fitz does not appear to have returned to this area although he is buried at Cortland Rural Cemetery.
Of course, this could all be conjecture…but what happened to our Fitz Boynton? Perhaps we will never know, and there’s never enough time to dig as deeply into these stories as I would like to. If you have any insights, we would love to hear them! ~Tabitha
2021-03-19
Previous Post: Streets of Cortland – Copeland Avenue
Next Post: Streets of Cortand – Pearl Street