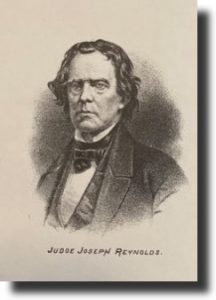 Today we are taking a look at Reynolds Avenue, that crooked little street between Tompkins and Union Streets. Reynolds Avenue takes its name from Judge Joseph B. Reynolds (1775-1864), an early Cortland County settler to Virgil. When I started reading about Judge Reynolds, I couldn’t help but wonder why, if Reynolds started off in Virgil, was a street in Cortland named after him?
Joseph B. Reynolds was born in Easton, Washington County, NY, and he came to Cortland County in 1808 at the age of 24. The only resources he had for his big adventure were the two cows he drove here. Once in Virgil, he traded milk in exchange for room and board for his bovines and he worked at clearing land for farmers for 75 cents a day. He built his wealth and in no time, he owned an early store and a small hotel called the Washington House. He donated land for and helped organize, the Baptist church in Virgil.
In 1812, Reynolds organized a company of riflemen for the militia and became the captain of the unit. It was placed on reserve by the state and they prepared to defend Syracuse. He eventually became a brigadier general in the militia.
Although deeply involved in affairs in Cortland Village, Reynolds operated from Virgil until 1839 when he married his third wife and built a beautiful home on Tompkins Street in the village. His property extended from Tompkins to Owego and Union Streets. The 1855 map shows a lovely place surrounded by trees. About 1890, Theodore Wickwire purchased the property and razed the Reynolds home to make way for the palatial stone structure seen today at 55 Tompkins.

Judge Reynolds served as a justice of the peace for 23 years and as a county judge for 18 years. He spent 10 years as the town supervisor for Virgil. He ran unopposed as a state legislator in 1818 and he also served two terms as a representative in the United States Congress, beginning in 1834. In his personal life, Reynolds was widowed three times and the father of four children. According to the NYS census of 1855, he had 4 servants, 2 male, and 2 female. The 1860 federal census lists his property holdings at 10,000 acres and he identified himself as a farmer. He was an impressive 6 feet 2 inches tall at a time when most men were much shorter than that.

One of Judge Reynolds’ most lasting legacies was his 1859 donation of 14 acres of land which was the beginning of the Cortland Rural Cemetery. He served as the first president of their board of directors. Joseph B. Reynolds died in 1864 and is buried at Cortland Rural Cemetery where his generous donation has given the city of Cortland a tranquil final resting place for so many of her citizens to this day. ~Tabitha
2021-03-21
Previous Post: Streets of Cortland – Woodruff Street
Next Post: Streets of Cortland – Grace Street