By: Tabitha Scoville
In: Places
Stevenson Street was named after Troy native Theodore Stevenson. He came to the then village of Cortland in 1872 and quickly built a name for himself as a man who got things done. His first occupation in this place was selling fire insurance. He set up an office over the First National Bank in an office with Judge Crandall. He started out representing several different insurance companies and his business soon outgrew his first office. In 1876 he moved to 22 ½ Main Street where he kept office for many years. After 1884 Stevenson added life and accident insurance to his offerings, and eventually, he moved his business to the Burgess Block.
By 1880, Stevenson was doing very well, and he built a two-story home on Groton Avenue. By the following year, he built a three-story mansard roof home at 7 Church Street. This lovely home was said to have been the first in Cortland with steam heating.
Theodore Stevenson was a virtual hurricane of industry. After completing his Church Street home, he purchased a 12-acre lot on Clinton Avenue from H.P. Goodrich where he built three Chautauqua cottages and two double houses. In 1882 he purchased land in the village and laid out the following streets: Hubbard, Garfield, Pomeroy, Crandall, Franklin, and Excelsior. He also extended Elm Street from Pomeroy to River Street. He later laid out Stevenson Street. The date of acceptance for the street is listed as December 6, 1897, however, it is shown in our 1888 map of the village of Cortland so perhaps it was in existence before a formal acceptance occurred. If you happen to know how street development occurs, please chime in below. 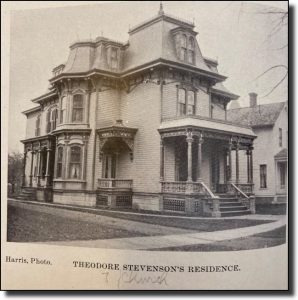 And Theodore Stevenson was far from done! He built four houses on Hubbard Street, three of those were double houses. On Elm Street, he built two large four gable double houses. Over on Pomeroy Street, he built three houses of 22 rooms each. He built just one house on Crandall Street (he must have been catching his breath!). On Excelsior Street, he built a three-story, 40 x 100 feet building with a large wing in the rear, and that became the Excelsior Top Company. In 1883 Stevenson built a three-story block, 75 x 225 feet building for the Howe Stove Company. 1887 saw him erect a three-story brick and frame building on Elm Street for the Carriage Top and Rail Company. In 1889 Stevenson built the Stevenson Block. By 1890, Theodore Stevenson was responsible for the building of 99 buildings, not including the three factories mentioned!
At various times, Stevenson served as the president of the Cortland Desk Company, the Howe Stove Company, and for the Carriage Top and Rail Company. He also served as a village trustee in the 1880s.
Even a hurricane will eventually subside, and Theodore Stevenson died two weeks after a “stroke of apoplexy” at the age of 61. His death in 1912 marked the sunset of a man of extreme industry who played a large part in shaping the east side of the City of Cortland as we know it. Stevenson was a member of the First Presbyterian Church and is buried at Cortland Rural Cemetery.
As always, there is surely more to the story of Theodore Stevenson than can be covered in a short post. If you have a house that you know was built by this industrious man, please let us know and we can add that to our files. We love to collect your stories to ensure that they continue to be shared for many years into the future! ~Tabitha
2021-03-19
Previous Post: Streets of Cortland – Rickard Street
Next Post: Streets of Cortland – Copeland Avenue