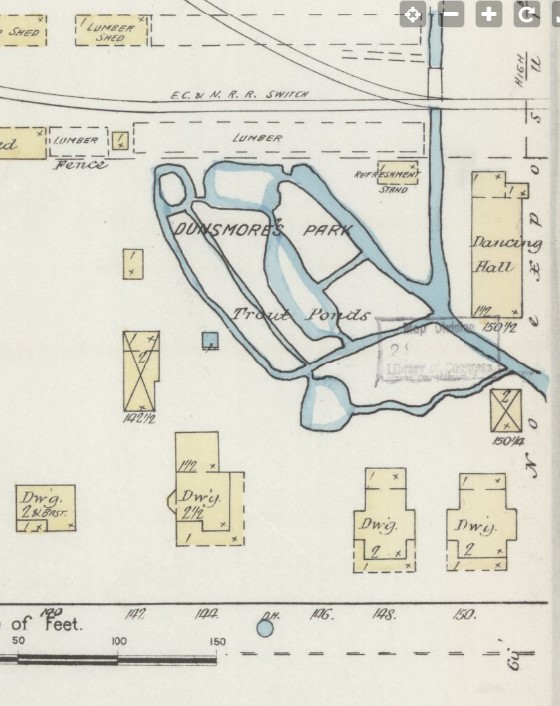 Dunsmore Avenue was named after D.F. Dunsmoor, according to the newspaper article I’ve been using to sleuth out the history of Cortland’s streets. I love it when there is an actual name attached to the street because that usually means it shouldn’t be hard to find information….not the case this time! I was determined to learn more about this street because City of Cortland Historian Kate O’Connell had told me that there was a park there on that corner that was similar to my favorite park, the Floral Fountain Trout Park which was over on South Franklin where the DPW is today. It should have been easy to find this guy, right?
We have no obituary for this man, and we have no family file for Dunsmoor/Dunsmore (the name was spelled both ways). We did have an obituary for Harry A. Dunsmore who was born at his parents’ house on Port Watson Street so there was my first clue. The reliable Blodgett and Stilwell scrapbooks don’t have a lick of information about Mr. Dunsmoor. I tried the usual Cortland historical publications (Grip’s, Smith, and Biographies) and only found Mrs. Ida Dunsmoor was treasurer of a club. I tried our Mae Watrous files, nothing. I looked at Find A Grave and didn’t find Mr. and Mrs. Dunsmoor buried in Cortland. I tried Ancestry and saw some things that made me think that Dunsmoor came from Oswego, but I needed to try to find a little more information before I tried chasing those leads. I looked at Fulton History to see if I could find any newspaper articles, and that was when Kate popped in. Since she was the one who had mentioned the park in the first place, I asked if she knew anything more. She didn’t, but she started sleuthing on Ancestry and Fulton History while I went ahead and checked city directories. Between the two of us, we finally found some information!
David F. Dunsmoor was in the Civil War, appears to have been married three times, had two sons, and was divorced in about 1896 by his second wife. He owned a meat market, then a grocery and Dunsmoor’s Park, was a postal clerk, and finally a traveling salesman during his time in Cortland. By 1896, Mrs. Ida Dunsmoor was living with their son and David Dunsmoor had moved back to Oswego (so yes, the clues on Ancestry were for our guy!).
One of the newspaper articles Kate found on Fulton History was about Dunsmoor’s Civil War experience and subsequent job as a postal clerk for the D.L. & W. Railroad. Dunsmoor was still a teen when he enlisted in 1864. He went to the front lines and was injured at Cold Harbor. He laid on the battlefield for two days with his injury before he was rescued. He spent the next year on the verge of death and was unable to hold a job for a full five years. He was appointed as a postal clerk in February of 1888, as many veterans were put to work in similar jobs. Unfortunately, both he and a colleague were dismissed from their positions for the railroad and replaced with unskilled political appointments.
D.F. Dunsmoor was married first to Bertie Blodgett, who died at age 27. They had a son named Burt who lived and died in Geneva, perhaps raised by grandparents. We did not pursue this avenue of research. Dunsmoor later married Ida Weeden and they celebrated a ten-year anniversary in 1886 while in Cortland. In October of 1896, Ida was granted a divorce and custody of their son Harry. In a newspaper article from 1899, Dunsmoor was claiming that he was unable to pay the alimony that he had been directed to pay to Ida. It further mentioned that he worked for his second wife, an A.E. Dunsmore. However, as best as we can tell, Ida was wife #2 so Anna E. would be wife #3. Son Harry was attending Cortland schools and planned to go to Cortland Normal. His obituary tells us that he attended Syracuse University and became a lawyer.
All in all, this was an interesting street to try to find information for. The main reason I wanted to find out more was so we could all learn more about Dunsmoor’s Park, but that was not to be. This 1887 Sanborn map shows a dancing hall, refreshment stand, and trout ponds. If you have any information about the park, we would love to know more! ~Tabitha
2021-09-21
Previous Post: Streets of Cortland – Jewett Avenue
Next Post: Streets of Cortland – Willow Avenue