Hamlin Street was named after the United States Vice President Hannibal Hamlin. Hamlin was the vice president under Abraham Lincoln during his first term. In the 1864 election, Andrew Johnson was chosen to run as vice president. Our story could end there, but the original name of Hamlin Street was Gazlay Avenue. Why?

Dr. Henry Champion Gazlay (1818-1900) was a physician in Cortland for many years. He graduated from the Eclectic College in Syracuse and began his practice in Truxton in 1841. He moved to Fabius until 1847, returned to Truxton, and then moved to Homer in 1857. He was a partner with Dr. Ezra Loomis for some time, too. Dr. Gazlay is listed in the 1887 city directory as a physician and surgeon as well as the jail physician. He practiced medicine for 40 years, all told.
The city directories placed Dr. Gazlay on Clinton Avenue for many years, and until I looked at the 1876 atlas, I did not realize that Clinton Avenue at that time was what is now Floral Avenue. Our Clinton Avenue of today was called Mill Street for some time. By 1888, Clinton Avenue was renamed Floral Avenue and Mill Street was renamed Clinton Avenue! Gazlay Avenue was still Gazlay in 1888. By 1896, the city directories list Hamlin Street and not Gazlay 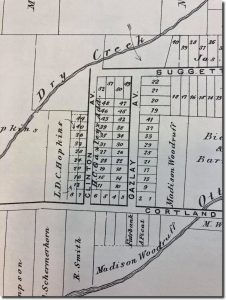 Avenue. I was unable to find out more about the eventual name change, but a tiny snippet in a newspaper article said that Dr. Gazlay renamed the street after Hannibal Hamlin because “people wanted a name change.”Had you ever heard of Dr. Gazlay or Gazlay Avenue before today?~Tabitha
2021-03-21
Previous Post: Streets of Cortland – Grace Street
Next Post: Streets of Cortland – Clayton Avenue