Moses was married to Anna Messenger and they had one child, Clayton E. Rowley. Clayton was born in 1843 and died in 1907. He was a railroad conductor for the E.C. & N. branch of the Lehigh Valley railroad. He finished the term of Benton B. Jones as acting postmaster when Jones died partway through his term. Clayton Rowley never married, and he lived with his widowed mother until her death, after which he lived alone in the big old Randall mansion. He was a member of the Water Witch Hose Company and donated to the new hospital. The write-up in the paper after his death indicated that he was a genial soul and quick-witted but not mean. 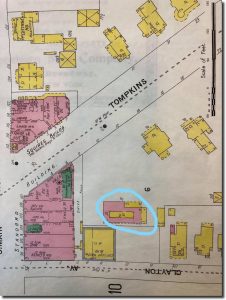 It was difficult to pull together much information about Clayton E. Rowley for this story. Small tidbits were tucked away in many different places. He seemed to have been an active member of the community, but he wasn’t a local headliner. Why did the new street get named after Clayton, and not the family name? It could have just as easily have been Rowley Avenue. The sentimental part of me says that it was named after Clayton because of a father’s love for his only child. What do you think? ~Tabitha
2021-03-22
Previous Post: Streets of Cortland – Hamlin Street
Next Post: Streets of Cortland – Wheeler Avenue