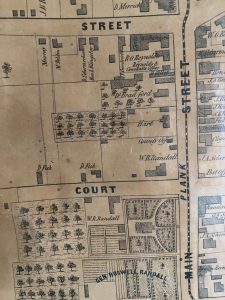 This street is simply named because of the orchard that was located where the street is today. I mistakenly thought that the orchard belonged to the Randall family, but when I looked more closely at maps, I realized it was part of land that belonged to Josiah Hart. (The Randall family did have a large amount of land, including orchards, on Main Street.) Just who was Josiah Hart? This will be far from a complete look at the man because there are very few leads that I was able to follow. As always, with more time, probably more resources could be found but there is just never enough time. I actually took this one home with me and used some online resources because I’ve been on a serious time crunch this month. I usually stick to resources I can find at CCHS because we have such an amazing variety of things to pull from and so many surprises await in files and boxes! It also helps me to connect this community member to that one for future references. For instance, our friend from last week, Hiram Crandall, signed the paperwork releasing the dower of Amanda Hart, widow of Josiah Hart. Everyone is connected!
If family trees online are to be believed, Josiah Hart was born in Connecticut on April 2, 1784. This does match census records that say he was born in Connecticut. Online resources show he was twice married, and this is also supported by census records. I did not go back far into census records here because according to online resources, the Harts moved from Connecticut to Herkimer County and then to Cortland County. It looks like they had six children. They appear to have lived in both Virgil and Harford. Josiah’s first wife Sophronia died in 1851 according to online sources, and I was unable to find a grave for her. Josiah was in Cortland and remarried by 1860. Son Orson was living with Josiah and his new wife, Amanda. Orson died in 1858, and Josiah in 1866. Josiah Hart and his son Josiah Hart, Jr. are buried at Cortland Rural Cemetery, but other family members are not listed there.
As far as the orchard on Josiah Hart’s property, I could find nothing that would tell us what was planted there. However, this is a topic that is endlessly fascinating to me, so I located several books on our shelves that discuss orchards and agriculture. Many orchard standards (apples, pears, plums, peaches, and cherries) were brought to North America by European settlers. Apples were tremendously important to people because they could be preserved in a variety of ways, including cider and dried, and used year-round. It’s important to remember that our ancestors had to grow, raise, or hunt for all of their food. They had to preserve it and make it last all winter long, quite a feat, particularly for a large family of growing children! What did Josiah include in his orchard? What I would give to know!
One resource I looked at while at home was Cortland County deeds. Did you know that you can search them from the comfort of your own home? It’s a fantastic resource! Josiah Hart owned and sold a good deal of property during his time in Cortland County. What else turned up about Mr. Hart? Incidental mentions found at CCHS let me know that he was a Mason and that he was a trustee of his church. While in Virgil and Harford, he held the position of supervisor and clerk, at least for a time. In 1825, he was elected to the New York State Assembly and was unsuccessfully challenged by Jabez B. Phelps.
I found a very interesting piece of legislation which was passed April 13, 1819 (so before Hart was on the Assembly) that approved a turnpike road from Cortland Village to Owego Village. Several familiar names are listed in the legislation, including William and Roswell Randall. The road would begin “at or near the store of W. or R. Randalls, in Cortland Village, and from thence to Virgil four corners; and from thence to Josiah Hart’s” and so on to Owego Village. That makes me wonder what business Josiah had in Harford that would benefit from a turnpike going directly past. Last week, City of Cortland Historian Kate O’Connell conducted a walking tour of downtown Cortland, and she mentioned how the roads changed in the past. There was a road that went from Homer to Owego, but the Cortland business owners diverted that road to Main Street so as to take advantage of the traffic. Perhaps this new Cortland and Owego Turnpike was the road that changed things. More research!
I have a feeling that Josiah Hart’s name might turn up in future research. There are always intriguing people that sort of play hide and seek in history, and I’m hoping we can learn more about him and his life. I hope you enjoyed envisioning what those orchards on Main Street looked like as much as I did! ~Tabitha
2021-10-26
Previous Post: Streets of Cortland – Crandall Street
Next Post: Streets of Cortland – Wadsworth Street