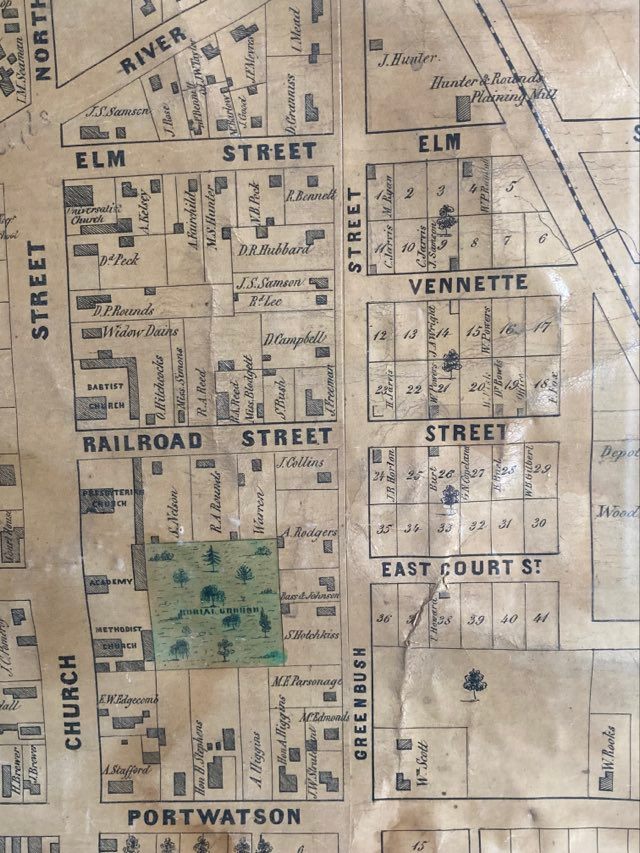 Venette Street caught my eye several months ago, but a cursory look for information about Venette Stevens, for whom it’s named, was fruitless. I moved on, but we have so few streets named after women, that this one kept nagging at me. For the last several weeks, I’ve been puzzling out some familial connections and streets, and the answers for Venette Street just floated to the surface! The next several streets that will be posted have been a tangled web of relatives that have been interesting to research.
Venette Street was named after Eliza Vennette Stephens, daughter of prominent Judge Henry Stephens. (Note that my source for street history listed her name as “Stevens” which was part of the problem when I did that quick search a few months ago. I also had no idea that Vennette was her middle name.) Judge Stephens was born in Enfield, Connecticut in 1792, and his family moved to Chenango County where he was to study law. Around 1816, he moved to Cortland Village where he began his practice with Oliver Wiswell. Judge Stephens was a contemporary of the Honorable Samuel Nelson, eventual U.S. Supreme Court Justice (1845-1872) and went toe to toe with him on cases in Cortland. Stephens was elected as a representative from Cortland County to the New York State Legislature in 1829. He was appointed by the governor as the first Judge of the Court of Common Pleas of Cortland County in 1838. He served in that capacity for eight years. Judge Stephens was the first president of the Syracuse, Binghamton and New York Railroad. He married Eliza Ballard, sister of Horatio Ballard (we will get back to Horatio with a story at some point!), and they had six children. Vennette was especially close to her baby sister Editha.
Venette Street is on the 1855 map of Cortland, so it has been in existence for quite a long time. Probably because she was named after her mother, Eliza Vennette Stephens went by Vennette. She was born in 1822 and died in 1896. She attended school at the Cortland Village Female Seminary and her obituary noted her “wide and intelligent reading and observation” as well as her wit. She was deeply involved in church activities and was a member of the First Presbyterian Church in Cortland. She was a Sunday school teacher and active in the women’s missionary societies. Vennette was on the board of the Home for Aged Women in Homer (the Elizabeth Brewster House) and she was involved in the Charities Aid Association for the Cortland County Poor House. Another organization she belonged to was the W.C.T.U. (Women’s Christian Temperance Union). Her younger sister Editha was by her side in most, if not all, of these activities.
In 1905, the First Presbyterian Church was planning on building an addition, the North Chapel. The North Chapel was designed by Architect George Conable whom we met before when we covered Conable Avenue. The project was to cost $6,500. By this time, Editha Stephens was the only remaining child of Judge Henry Stephens and Eliza Ballard, who were also deceased. She offered to give the church a $5,000 loan at 5% interest to be paid to her during the remainder of her life with any remaining balance being a gift upon her death. She did this in memory of her sister Vennette as well as of her father. Ground was broken on June 5, 1905, and the building was dedicated on December 10, 1905.
In Vennette’s obituary, it was stated that the passion of her life was her tireless activities on behalf of the poor. Even her closest friends did not know the extent of her charity because she did not display it. Her selfless commitment to helping people was not for show. Neither Vennette nor her sister Editha ever married. This influential and community-oriented family is buried at Cortland Rural Cemetery.
I was really hoping to find some photos of the various Stephens family members, but unfortunately, we do not seem to have any. What a treat it would be to see the faces of these folks who played an important role in shaping our city and state. They lived during the age of photography and had the means to pay for photographs, but as is so often the case, the items may not have been preserved. If you have photos, documents, and other memorabilia but no one to give it to, a good option is to check with your local historical society. If the items are pertinent and fill a gap in their collection, they will often give the items a home for future generations of researchers to discover. ~Tabitha
2022-02-08
Previous Post: 1898 Democrat Wagon
Next Post: Streets of Cortland: William, Randall, and Huntington Streets/Part 1