The research center at the Cortland County Historical Society is THE place to find answers about your ancestors, famous people from the area, or property around Cortland County.

Using the center’s resources I’ve been investigating the first settlers of the various towns in our county. Some very interesting stories!! Following Amos Todd and Joseph and Rhoda Beebe, Joseph Chaplin was the first to settle his family in Virgil (1794-5). He built his home on the Tioughnioga River near what is now Messengerville. He had been previously busy establishing the first road from Oxford to Ithaca. His family originated in Massachusetts.

The next settlers in Virgil were John M. Frank and his family. John was a Revolutionary War veteran and settled on his allotted parcel of land – Lot 43. The family had traveled from Montgomery County, NY, to Cooperstown, down the Susquehanna River to Chenango Point then up the Chenango and Tioughnioga Rivers to the area of Chaplin’s home in Virgil.

The interesting fact about Frank was that he born in Germany, was possibly a Hessian soldier, and was a Revolutionary War veteran. The inscription on his gravestone reads “John M. Frank was born in Brunswick, Germany. He emigrated to America at an early period of the revolution; joined the contest for freedom, and fought for Independence.” A note in his family folder states that John was a Hessian soldier fighting for the British, was captured, and subsequently joined the Revolutionary force. Brunswick, Germany was one of two sources of Hessian soldiers. This story would make sense but I’ve not found any records to support it.

His record for a Revolutionary War pension states that he enlisted in October 1777, served as a private in Captain Smith’s company, Colonel VanCortlandt’s 2nd New York regiment. He was in the Battle of 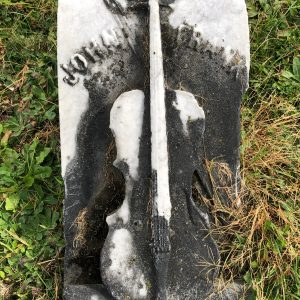 Monmouth and continued to serve until June 7, 1783.

The small stone with carved violin is for his grandson, John M. Frank (1830-1874) 📷Virgil Rural Cemetery