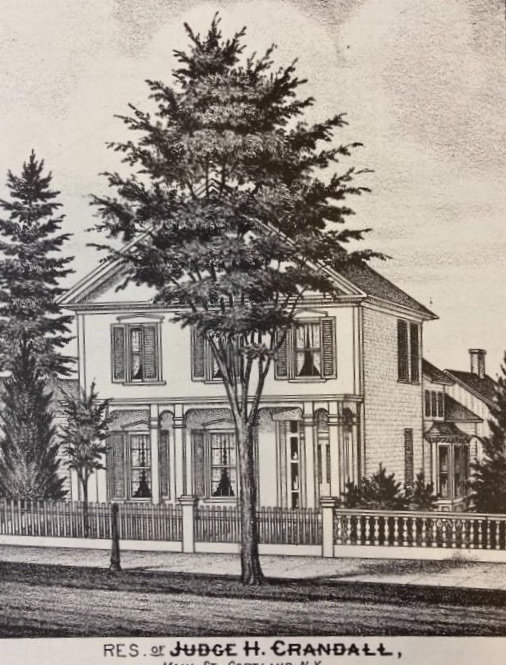 Judge Hiram Crandall was born in Chenango County in 1818 and died in Cortland County in 1881 after living much of his life here. Crandall Street is named after this much loved citizen of Cortland Village.
Hiram Crandall’s parents were Richard Crandall and Abigail Ransom Crain. Richard operated a distillery in Norwich in the 1820s but lost everything. He moved to Hornby , Steuben County, and started another, smaller, distillery which also had financial difficulties. He moved to Burdette, Schuyler County, and operated a large distillery for five years before moving to Cortland. It would seem that Richard was a man with a bit of wanderlust because he moved to Wisconsin in 1835, but then moved back and forth from there to New York. (Wisconsin was still a territory until 1848 when it became a state.) It would be interesting to learn more about what Richard did for a living while in Wisconsin because it was a hub of fur trading in those days and the sale of spirits was probably brisk! Did he continue in the distillery business out west? However, Hiram Crandall is our focus, so we can leave Richard for another day.
Hiram Crandall received his education at the Homer Academy and then went into the law office of Judge William Shankland. He studied there until his admission to the bar in 1846, and at that time, he became a partner with Shankland. They remained partners until Judge Shankland was appointed to the New York State Supreme Court after which time Crandall became partners with Robert O. Reynolds. They partnered together for nine years. In 1859, Crandall was elected as Cortland County judge and surrogate, a position he held for 8 years. Our own John Suggett studied at the elbow of Judge Crandall, and Suggett went on to become a very successful patent attorney who was very involved in the community, as his mentor also was.
Crandall preferred his office business to the courtroom. He was genial, good-natured, and “an ornament to the community as well as to the bar of the county.” He was a prominent attorney in Cortland Village, and his biggest client was the First National Bank of Cortland. His office was above the bank. We have 15 boxes of Judge Crandall’s papers here at CCHS and one would imagine that was just a small sample of his life’s work.
Judge Crandall was one of the original trustees of the Cortland Savings Bank (founded in 1866) and served as a trustee until his death. In fact, when he died, both the Cortland Savings Bank and the Cortland County Bar Association put out announcements expressing the great sadness and shock the community was feeling because of Crandall’s sudden death. Another project Crandall was involved in was the formation and building of Grace Church. The building was completed on July 13, 1860.
Hiram Crandall was married twice, first to Wilhelmina Sanders and then to Jane F. Barnes. I was unable to find anything on Jane, but Wilhelmina was the mother of Hiram’s two children. Catherine was born in 1863 and Richard was born in 1867. Sadly, Wilhelmina died about two weeks after Richard’s birth, probably due to complications involved in childbirth, as so many women in those times experienced. Even more tragically, Richard died in 1881 from a bout of scarlet fever at the age of 14. Judge Crandall was said to have taken it very hard, and he died just months after his son. Many of the Crandall family are interred at Cortland Rural Cemetery, including Judge Crandall.
Judge Crandall was remembered in his obituary in the Cortland Democrat as a “warm friend and a genial, whole-souled companion, whom it was a pleasure to meet.” What a wonderful description of this former citizen of Cortland. Had you heard of Hiram Crandall before today? For such an influential and revered citizen, I had to hunt for information about him. The Streets of Cortland posts have allowed me to learn so much about the people who influenced the development of the City of Cortland. I hope that through this series, these important folks are remembered through another generation. ~Tabitha
2021-10-19
Previous Post: Streets of Cortland – Excelsior Street
Next Post: Streets of Cortland – Orchard Street