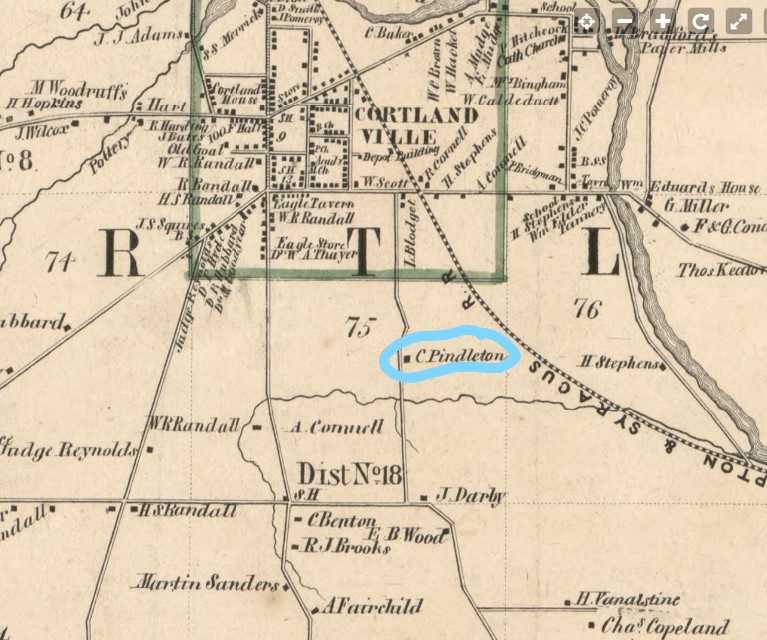 You might remember in our recent post for William, Randall, and Huntington Streets that I mentioned a Lucy Pendleton who was the mother of William and Roswell Randall, prominent businessmen who came to Cortland in the early 1800s. Because of Lucy, I was certain that Pendleton Street was another street connected to the Randall family, but boy was it hard to figure that out! Lucy’s son Roswell named one of his sons William Pendleton (also called Billy P.), and Billy P. and William Randolph Randall (his cousin) both owned land at that end of the city. With Lucy as a grandmother and Billy P. having Pendleton as a middle name, it seemed pretty likely that the Randall family might have influenced the naming of the street. I did not see a Pendleton who owned property on either the 1888 or the 1855 Cortland map so the theory seemed a good one.
However (of course!!!), while looking through the Pendleton family file, I saw some correspondence that mentioned Clark Pendleton’s farm “up on the hill.” Well now. How did I miss that? Back to the maps I went only to find no trace of him. Then I got smart and went to the 1855 Cortland County map. The other maps I was looking at did not show as far out as the Clark Pendleton property, so I’d missed it! I went to the 1876 atlas as well though I did not find Clark Pendleton on that map.
Now that I knew about Clark Pendleton, I needed to find out more about him. He is a man who left very little trace of his existence behind. I combed through the indexes of our often-used local history books and scrapbooks but only found that he was a private in the “old 58th regiment” under the command of Roswell Randall. Interesting that the tidbit of information connected to a Randall once again! I had to turn to online resources to see if I could figure this out. First, I looked at Find A Grave where I found that Samuel Clark Pendleton, his wife, and children were all buried at Cortland Rural Cemetery. Luckily, there was a short obituary for Samuel Clark Pendleton which allowed me to dig for additional sources online. I was also still convinced that there was a Randall/Pendleton connection, especially when I saw that one of his sons was named William Randall Pendleton.
Between the obituary on Find A Grave and a genealogy book I found online, here’s what we know about Samuel Clark Pendleton. First of all, he dropped his first name and went by Clark. He had a brother who similarly dropped his first name and was known by his middle name. Clark was born in 1799 in Westerly, Rhode Island, and he married Naomi Smith in 1826. (Fun fact: Clark’s birthday was February 15th and Naomi’s was February 14th

). The couple moved to Cortland County and all five of their children were born here. Deeds show that Clark was in Cortland County as early as 1825, though he could have been here earlier without property. The Pendletons had a large farm and engaged in dairy. I found a few newspaper articles online that let me know that Clark was one of the original trustees of the Cortlandville Academy and that he was active in the Democratic party. According to the genealogy book, Clark was highly esteemed by all who knew him, and Pendleton Street is named after him.
Was I able to figure out the Randall/Pendleton connection? Yes, I finally puzzled it out using the genealogy book I found online. Lucy Pendleton’s father (William Pendleton) and Samuel Clark Pendleton’s great-great-great grandfather (Joseph Pendleton) were brothers. (Note: if you thought the Randall family had a lot of Williams, the Pendleton family is loaded with Josephs!) I believe that makes Lucy and Clark first cousins three times removed. In doing research on the Randall family and the Pendleton family, I found that both had ancestors in Westerly, Rhode Island and Stonington, Connecticut. The two locations are close to one another. The Stephens family, which we also talked about in the posts about Venette Street and William, Randall, and Huntington Streets, also came from this area of the country.
Genealogy is fascinating as well as addicting! If you have not begun to research your own family tree, what’s stopping you? We have all kinds of resources available at CCHS and we offer a full-service research experience at CCHS. We help you dig for any and all resources that might be useful