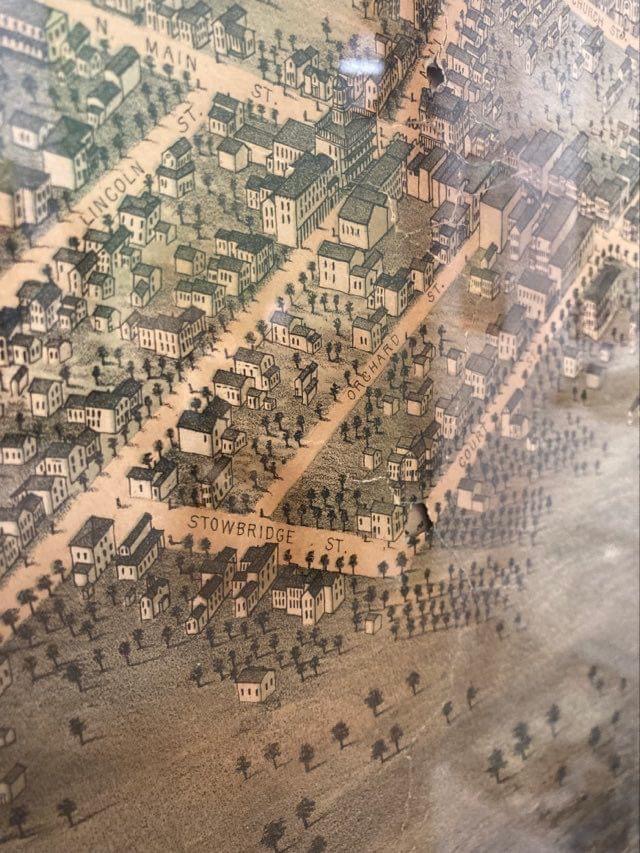 Did you know that Monroe Heights was called Strowbridge Street at one time? I would not have known this if not for a chance glance at the 1873 bird’s eye map of Cortland a few weeks back. (Note: If you’ve never heard of a bird’s eye map, they are wonderfully detailed maps of a location that set you down right on the streets of that city. (If you have the time, you should watch this Lunch and Learn talk from former CCHS Trustee Christine Buck: https://www.youtube.com/watch?v=9319C9XcTP4…, it’s quite informative!)
Back to the map. When I saw Strowbridge Street on the 1873 map, I immediately went out into the hallway to investigate the 1855 and 1888 maps that we frequently consult. There is not a street in that location in 1855, and by 1888, the street is labeled Monroe Heights with the Strowbridge property still located on the corner of Monroe Heights and West Court Street. The city directories say that the address was 20 Monroe Heights from the early 1890s through 1904, the year of the death for Dr. Lydia Strowbridge.
Hmm, an 1800s female physician in Cortland County? Absolutely! Lydia Hammond was born in Freetown 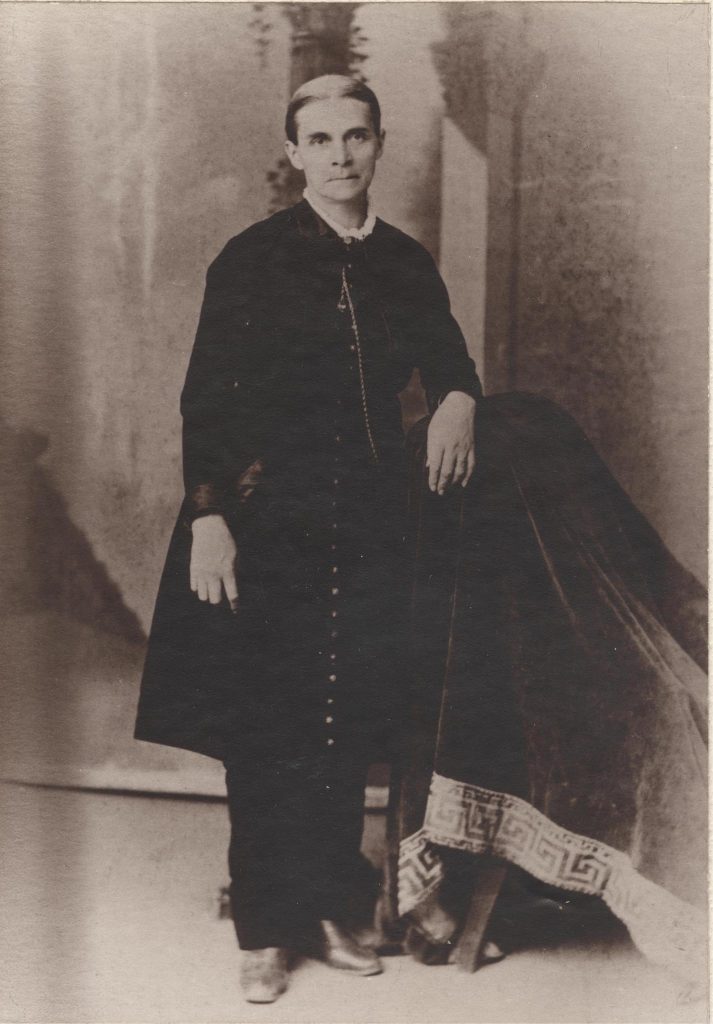 in 1830 to parents Silas Hammond and Mary Ann Saxton. Her father was an abolitionist who supported the New York Central College in McGrawville, a school that accepted students of color as well as both males and females. The school also employed teachers of color. Her father’s abolitionist leanings may have influenced Lydia’s beliefs in equality for women. Not only did she enroll in medical school when her husband John Winslow Strowbridge enlisted in the 185th New York Volunteers during the Civil War, but she also was an active supporter of dress reform and wore the bloomer costume, a knee-length short skirt worn over pants. This outfit eliminated the need for layers of heavy petticoats and made movement and many activities much easier. As a physician, it certainly would have been less cumbersome than the typical long skirts that were the norm for women. Dr. Strowbridge was a member of the National Dress Reform Association and served as its president, 1857-1858. In addition to dress reform, Strowbridge was also active in the suffrage movement and supported temperance. She was a member of the Women’s Christian Temperance Union and the Independent Order of Good Templars.
John and Lydia married in 1851, and they had three sons. Lydia completed her medical studies at the Hygeio Therapeutic Medical College of New York City and began her medical practice in Freetown. Eventually she would move her practice to Cortland where she built a larger practice. She was well-liked for her sympathetic manner and skills in treating those who were ill. She specialized in diseases and ailments of women and children.
In February of 1879, Lydia was attacked at the home of one of her sons. She was at the home while her son and daughter-in-law were out for a night on the town. At around midnight, two men were banging on the basement door where a boarder lived, and Dr. Strowbridge yelled out a window for them to leave. The men said if the door was not opened, they would kick it in, and they proceeded to do so. Lydia ran out of the house for help from a neighbor, but the men caught her by the hair and threw her to the ground where they repeatedly hit her head. Her screams made them finally leave, but Strowbridge followed them to Main Street where she saw them go into a saloon. She got help, and while one of the men was arrested that night, it took a few days to find the other. The men had been drinking when the attack happened, and we don’t know what happened after they were arrested but GO Dr. Strowbridge! What a brave woman!
John Strowbridge died in 1898 while driving his cutter to collect Lydia from the train station. Someone saw him sink to the floor of the cutter, and some men apprehended the horse. After realizing he was dead and could not be revived, they took him to his home and sent word to Lydia. Lydia passed away from cancer in 1904 after having lived with it for three years. She continued to work up until about three months before she passed. Both John and Lydia are buried at Cortland Rural Cemetery.
As for the change of name to Monroe Heights, the newspaper story I’ve been using to figure out more about the street names indicates that it was named for former United States President James Monroe. The real question left for us to wonder about is if Strowbridge Street was named for Captain John Winslow Strowbridge or for his wife Dr. Lydia Strowbridge. Both seem to have been thought highly of in the community so it’s anyone’s guess until more information comes to light. ~Tabitha
2022-03-08
Previous Post: Streets of Cortland: Pendleton Street
Next Post: Streets of Cortland ~ Floral Avenue