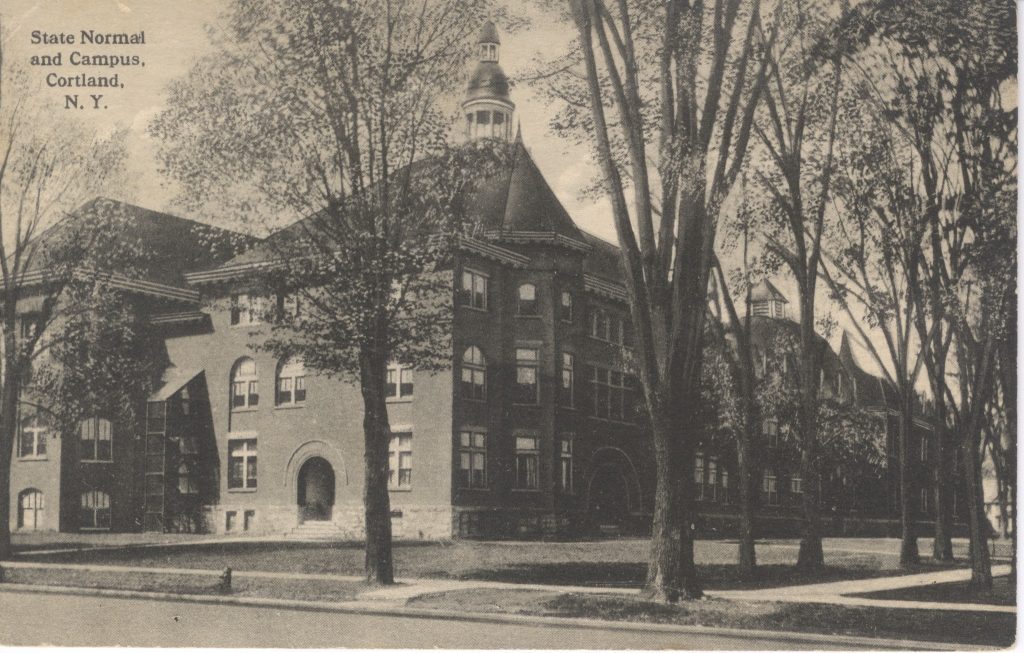 While perusing the 1888 map of Cortland at CCHS, I happened to spot a small street between Church and Greenbush Streets that was called State Street. How interesting! There is no trace of this street left today if you consult Google maps. The newspaper article I’ve been consulting for information about the streets of Cortland does not list the inspiration of the name of this forgotten street. State Street opened on Port Watson Street a little more than halfway between Greenbush and Church Streets and led directly to the State Normal School. I did not find any resource that indicated that the street might have been named after the State Normal School, but it makes sense that the name came from there. It appears that it might have been like an access road to the school.
If you are scratching your head and wondering what a “normal school” was, it was school to train teachers. The idea was founded in France in the 18th century when a unified public school system was developed there. This meant that teachers would teach the same way across the school system, and the name L’Ecole Normale de France referred to the norms or standards established for training teachers. The idea spread to the United States, and in 1844, the first New York State Normal School was established at Albany. A school in Oswego followed, and in 1866, the state decided to establish four more normal schools. The state invited locations to submit petitions to share why a normal school should be established there. Cortland Village submitted a petition, as did Homer and McGrawville (among many others). There was opposition from the state superintendent of public instruction who believed Cortland was too small to support a normal school and that there would not be enough students.
Luckily for us, we had not one, but TWO former Secretaries of State of New York to make the case for a

state normal school in Cortland. Horatio Ballard was a native of Homer and served as Secretary of State from 1862-1863. Henry Stephens Randall was the son of Roswell Randall and came to Cortland as a child. He served as Secretary of State from 1852-1853. Both gentlemen used their connections across the state to make sure that Cortland was in the running for a normal school. The people of Cortland were invested in the idea of bringing a normal school to the village, and they put up $100,000 for construction. The village also provided land in the center of the village for the purpose of building a normal school. Additional land was given for the new school by the Cortlandville Academy which gave up its land, building, and equipment with the stipulation that there would always be an “academic department” for all residents of the village to attend the normal school for free. One other piece of property was added to the site for a normal school, and that was the village cemetery. All this land was located where our courthouse and the park stand today. The graves in the cemetery were exhumed and the individuals buried there were removed to Cortland Rural Cemetery by wagon. Cortland finally paid off the bonds acquired to build the normal school in 1902. The bonds had been refinanced over the years and Cortland paid over $100,000 in interest.

Cortland was selected for the location of a new state normal school, and the cornerstone was laid in 1867. The day-to-day operations of the school were managed by a Local Board of Managers, so although it was a state school, it was Cortland’s school. There was certainly ownership and stewardship of the institution. It was a source of pride for locals, and they were committed to its success.
On February 27, 1919, there was a fire at the school that destroyed the building despite measures that had been taken to contain any fire. Firewalls had been constructed, and they worked, but not for the roof. The fire quickly spread across the attic and consumed the interior. People worked frantically to empty the library shelves until it was too dangerous to continue. After the fire, classes were held for four and a half years in churches, in the courthouse (including in rooms adjoining the jail and the courtroom), the YMCA, the old Franklin Hatch Library, and above a laundry on Court Street. The library was rehoused at a home on Greenbush Street, and Principal DeGroat’s office was at Cortland Savings Bank.
It took a long time to come to a consensus on location. Some wanted to rebuild where the school had been, while others recommended Randall field (where Randall School is today), and still others wanted to move up to the top of the hill. Ultimately the school moved to the hill. The cornerstone for Old Main was laid on May 21, 1922, and it was completed on August 16, 1923.
Much of the information for this piece came from a terrific book by former CCHS Trustee and SUNY Cortland professor Leonard Ralson. The history of the Cortland Normal School/SUNY Cortland is fascinating! Education was important to our forefathers here in Cortland County, and due to their foresight, we have SUNY Cortland here today. ~Tabitha
2022-04-05
Previous Post: Streets of Cortland ~ Richard Street
Next Post: Streets of Cortland ~ The Presidents