Streets of Cortland ~ The Presidents

By: Tabitha Scoville
In: Announcements 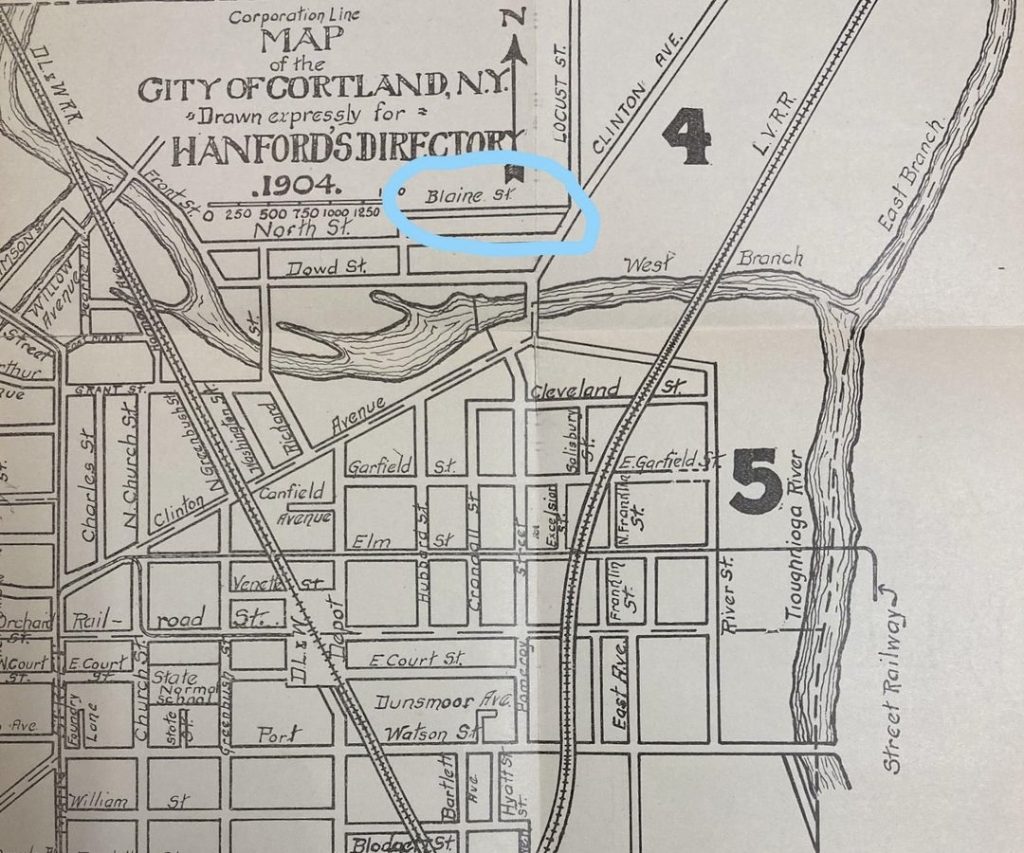 According to the newspaper article that details the origins of street names of Cortland, ten of the city’s then 122 streets were named after United States Presidents: Arthur, Blaine, Cleveland, Garfield, Grant, Harrison, Lincoln, Madison, Monroe, and Washington. Blaine? Who was Blaine and where is there a Blaine Street in Cortland? A quick internet search revealed James G. Blaine ran against James A. Garfield for the Republican presidential nomination. Blaine was later appointed to Secretary of State under President Garfield. One mystery solved. There was, in fact, a Blaine Street in Cortland! It was a small street located off from Clinton Avenue which was removed when interstate highway Route 81 was built in the 1960s. Mystery two resolved!
When researching Rickard Street, I discovered that the street was named after Civil War veteran Israel Rickard, and that Rickard had a brother named George Washington Rickard. Israel was twice married and twice widowed, and upon the death of his second wife, Israel moved in with his brother George at his home on Clinton Avenue which was located right before the turn onto Rickard Street. It could be that Washington Street was named for George Washington Rickard and not President George Washington since Rickard Street was named for Israel and George’s house and property was right there. We might never know for sure, but Washington Street is still up for debate!
Because Blaine is not a local notable, we can instead turn our attention to a local man of political note, Daniel S. Lamont. Lamont served a term as the U.S. Secretary of War under President Grover Cleveland. He was born in McGraw (at that time called McGrawville) on February 9, 1851. His father started a grocery business about a year after Daniel was born, and he spent his spare time helping his father in the store. At 12, he went into a printing office and his interest in the newspaper industry led to involvement with the “Albany Argus.” He also became involved in politics and was very active in the Democratic party.
In 1882, he became a private secretary to then New York State Governor Grover Cleveland. When Cleveland became President of the United States, he kept Lamont on as his private secretary, later placing him in his cabinet as his Secretary of War (1893-1897).
Lamont died in 1905 at only 54 years of age. He was a millionaire at the time of his death, and though he lived in Millbrook, he never forgot his Cortland County roots. He was a generous supporter of both the Cortland Memorial Hospital and of the YMCA. After his death, his widow Juliette (Kinney) Lamont donated his family home in McGraw to the village for use as a library.
It is interesting to note that political and friendly connections to United States Presidents were more common in the past for Cortland County residents. We have multiple people from our past connected to U.S. Presidents. It was a smaller world as far as the population of the United States, and it was a closer world as far as acquaintances and family ties that brought Cortland County residents in touch with the Presidency of the United States. That’s a topic for many additional posts! ~Tabitha
2022-06-28
Previous Post: Streets of Cortland ~State Street
Next Post: Main Street Monday: 1 Main Street