Streets of Cortland: The Tree Streets 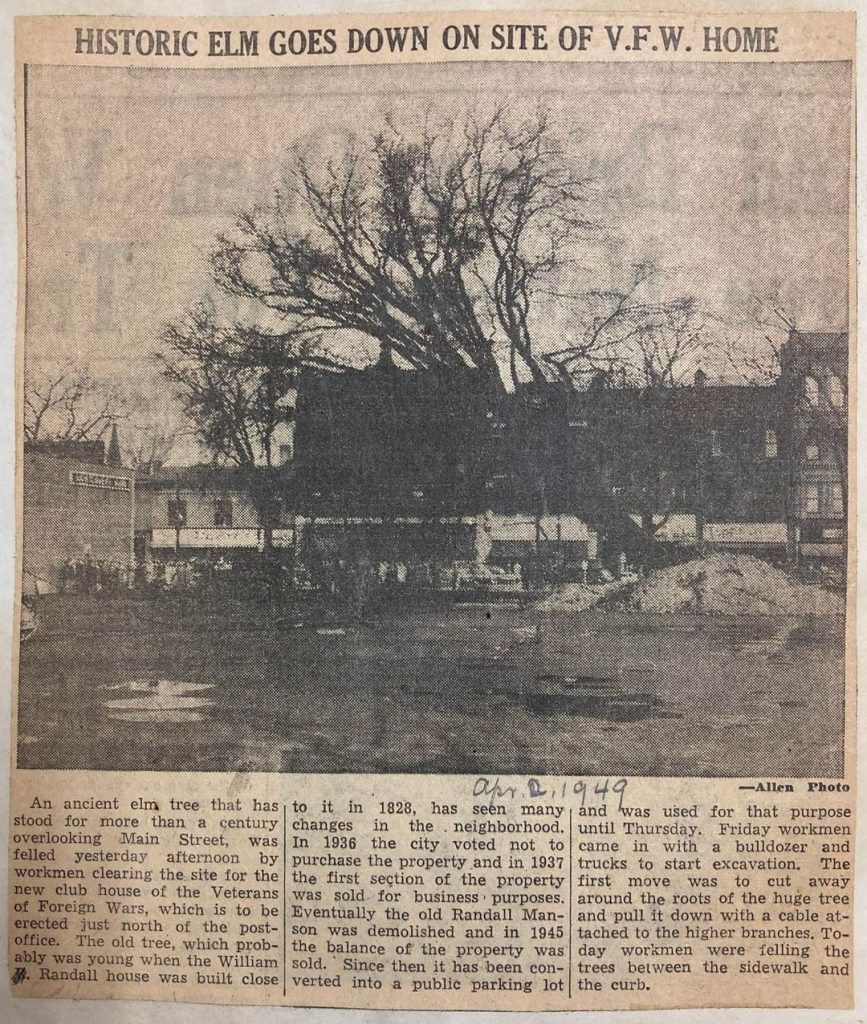 Like most cities, Cortland has a fair number of streets named after trees. In the old newspaper article (circa 1908) I’ve been using to investigate street names, we see Maple, Chestnut, Elm, Evergreen, Locust, Willow, Greenbush, and Holly Terrace listed. One could probably include Orchard Street in that lineup as well. In the years since 1908, other streets have popped up with tree-type names: Forrest, Pinecrest, Cedar, Oaklin, Redwood, Woodcrest, Rosewood. In previous posts, we have covered Maple (formerly Merrick Street), Willow Avenue, and Orchard Street, and you can find those stories on our blog (Blog : Cortland County Historical Society (cortlandhistory.org)). This post will focus on the tree named streets listed in the newspaper article and not on more recent tree inspired streets.
As you can imagine, some of the streets were thus named because of the type of trees that were growing there. Elm Street was “formerly shaded by large elm trees,” Locust Street had “several locust trees standing on the street,” and Evergreen Street “formerly contained much evergreen shrubbery.” (Note: If you just imagined Monty Python’s Knights Who Say Ni, you are not alone

)
In our newspaper article, it doesn’t say that Chestnut was named for Chestnut trees, but the American Chestnut tree was an incredibly important tree to the white settlers who came to this country. According to Eric Sloane, author of many titles about life for early Americans, our ancestors would have used a variety of wood for many different purposes, and they would have been cognizant of how the qualities of each type of wood complimented the qualities of other types. An example would be when building furniture or wagon wheels. Different types of wood would be used together in the same project because using multiple types of wood created a better finished product. Sloane’s “Reverence for Wood” is a must read if you find the topic of interest. Even if you don’t think you are interested, between the stories and the illustrations, Sloane will pull you in!
Unfortunately, the American Chestnut tree fell victim to a blight that caused the demise of the species. The blight kills the tree, though some trees can begin to regrow from the dead parent tree. However, the saplings never get old enough to produce nuts, so they cannot reproduce. The loss of the American Chestnut was an environmental disaster. When one species is affected by something significant like blight, everything that is dependent on that species is also affected like wildlife, insects, and the soil. Today there is research and experimentation to try to create a blight resistant chestnut. Check out our YouTube channel to see a recent program about the people working to bring the American Chestnut back (The American Chestnut: Past, Present, & Future (Valerie Ross) – YouTube). It’s a fascinating story of science, resilience, and hope for the future.
Greenbush seems to be a name related to trees rather than to be a species of tree, and it is also a family surname. Greenbush Street is on our 1855 map of Cortland, so it is one of our oldest streets. I looked at census records up until 1855 to see if there was any Greenbush family living within Cortland County but did not find any so it’s not apparent how this street was named.
Holly Terrace is a bit of a mystery to me because I had never heard of it. For anyone unfamiliar with the name, it is a little street off from Pleasant Street. The street first appeared in the 1906 city directory, and the last directory we have in our collection, 1988, lists “no information.” When I looked at Google maps, it does show up, though it looks like a drive, not a street. In 1906, Harvey D. Hollister was living at 1 Holly Terrace and Dr. Joseph E. Burchill was living at 2. Perhaps the name Holly Terrace came from Hollister.
I found an interesting manuscript of a talk given by Frank Place, Jr. about trees in Cortland. His talk was in 1954, and he noted trees that were 100-150 years old at that time (which have since been cut down). Two hundred years ago, trees were cleared in great quantities by white settlers to build homes, clear fields, make charcoal and potash, burn for heat, and use in tanneries. When you look at old photos, take note of the cleared hillsides of yesteryear. Thankfully, reforestation efforts have taken place over the years to help with erosion and flooding caused by deforestation, and we have lush green hillsides all around us. Take some time to enjoy the trees this week! ~Tabitha
2022-07-12
Previous Post: Main Street Monday: 1 Main Street
Next Post: Main Street Monday! #2-4-6-8 Samson Block